Living on the edge like I am back again
Cambodia why do you have to be so tough
I let myself float above the water like I had enough
Looking at the sky, I can feel your pain

Drinking this glass of wine got me in the mood for poetry. I wanted to set a vibe before I started this article about Cambodia. Tonight I am a poet, and I make words rhyme!

It all started two weeks before my birthday. I always had this birthday anxiety wondering what I will do for this special day. I looked at the map like I won the lottery and my fingers landed on Cambodia. I didn’t have any knowledge what so ever about Cambodia besides the genocide that took place less than 30 years ago.

This how it went down…

I was looking for a travel companion, but no one was really into Cambodia. My friends were wondering why I wanted to visit a third-world-country instead of going to Tulum. The fuck
I ended up bringing my mom along. I thought of her being an ex-hippie, she might want to go on an adventure with me. She accepted my invitation only if we didn’t fly with a shady airline like China Eastern. I didn’t want to die either therefore I looked on airlinesratings.com the hub of all the travel psychos.
Emirates seemed the best option even though we arrived two days later looking like we were survivors from the jungle. Mama, we made it. 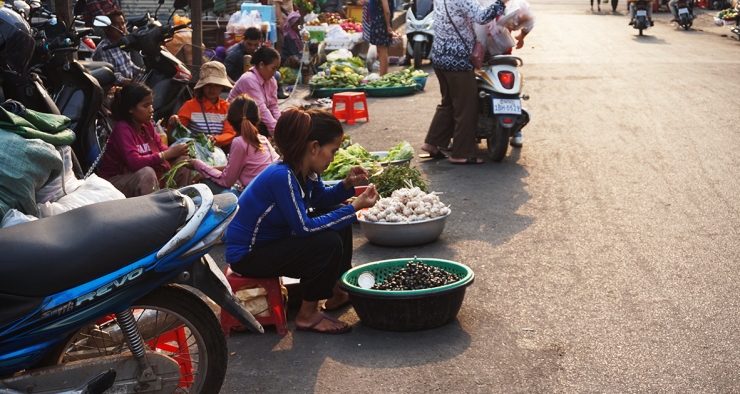 We woke up in a gorgeous suite like true ballers. 264K riel a night baby (which is indeed 65 dollars when you make the conversion).
I looked out of the window and was quite surprised to be surrounded by skyscrapers, rooftops with swimming pools and nightclubs. Over the last decade, Phnom Penh’s landscape changed due to the booming economy. The number of tourists rose by 5% in 2017 and backpackers had slowly started to desert the city allowing a more upscale clientele to take over.

Phnom Penh is a vibrant city and busy metropolis where tuk-tuks ran the show.
I could sense that Tuk Tuk’s drivers thought they were on the Pimp My Ride show the way they were polishing the wheels. For two dollars (sometimes one if you’re lucky) they take you around the city, speeding up like this is some Formula One race. They always want to know where you’re from, making random guesses. One of them thought I was from South Korea. Nigga, please.
We wondered across Phom Penh, visiting luxurious temples, crowded night markets and running away from chicken feet merchants. 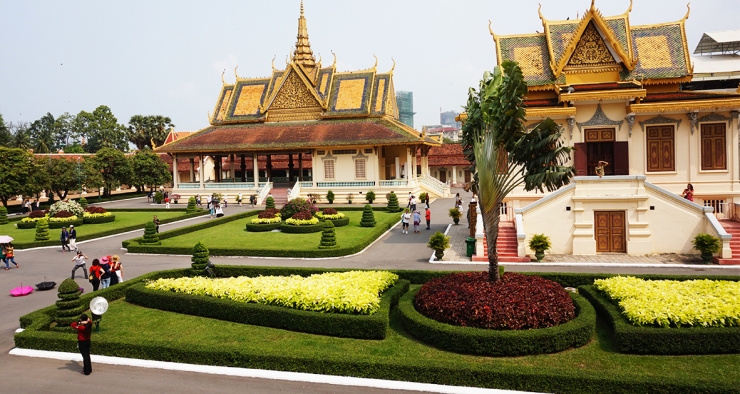 Phnom Penh has an exciting nightlife. On the one hand, you can choose to hang out with escorts on Street 104, where is ratio is 20 women for one man. Whereas, on the other side you can immerse in a luxurious and extravagant environment.

It was my birthday, and I was ready to get down. A friend of mine introduced me to a local DJ’s that decided to take me under his wing for this special night.
At 12 o’clock sharp DJ Illest pulled up with his Porsche meanwhile I was still riding around with my tuk-tuk wearing a bright yellow silk dress. You fancy huh
Neither did I know that he was the co-owner of a famous club located on the South side of the city.
At our arrival, we had the whole royalty treatment. It was a busy night, and people were greeting us as if we were K-Pop rockstars. Surprisingly, the crowd was a little snobby and people were shaking their upper body as a sign of enjoyment. Only expats were in the middle of the dance floor experimenting with new dance moves.
After 4 Red bull, I was long far gone doing my routine on stage and begging the DJ to play Playboi Carti. I guess we had different music « opinions.» He decided to go with Akon « smack that,» a song we haven’t heard in 20 years by the way. Yes, I am hating.

A rural break from Phnom Penh’s effervescence was needed. My quest for authenticity led my mom, a random Korean man and myself to Silk Island.
We embarked on a small wooden boat decorated with living rooms items. A wardrobe would have been the only item missing to complete the whole vibe.
The captain, Chun, didn’t speak a word of English. He nodded every time I asked him for further information on the tour.

The ship berthed on a picturesque side of the island where horses, cows, and roosters were running along on the grass. We got out of the boat and walked toward a tiny wooden bridge hoping not to fall in the water. Chun’s friend was shouting « no worries, no crocodiles in the water.»

We wandered across the island, waving at locals as if we were on National Geographic channel. Our guide brought us to a silk factory located in the jungle. Women were sitting on the floor sewing silk scarfs with old machines. One of the workers repeatedly tried to teach me how to make nods with the silk. I was hopeless 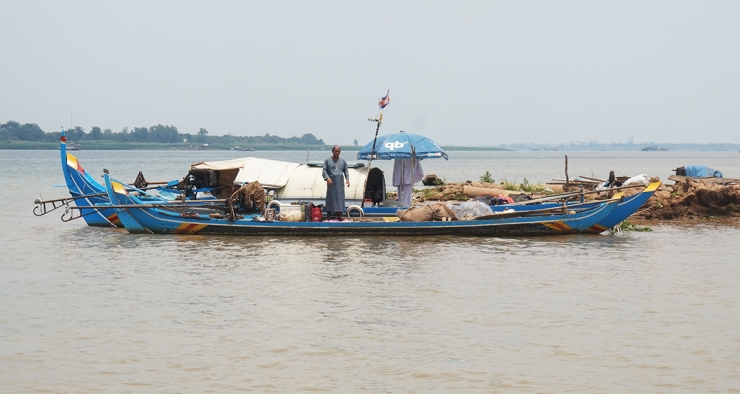 Angkor is one of the most significant archaeological sites in operation in the world according to the Unesco. These massive temples were built at the end of the 10th in Siem Reap.

Mom and I were on a mission. We had 24 hours to visit the Angkor temples located 7 hours away from Phnom Penh. The travel agency sold me tickets from a carrier called Varat bus. Yes, I know the name sounds suspicious.
I did a little investigation, and I had all the reasons to be anxious when I read comments on trip advisor like: «the driver fell asleep and we almost died » « the bus never showed up » « someone took my seat I had to wait for the next bus which was… the next day ». I had to stay strong. The truth was the tickets weren’t refundable. I was in a hood mode, showing up 2 hours before the departure to make sure I will get a seat. Not only the bus was on time, but it was very cozy! We had a bed with pillows and sheets. Trip Advisor for real

The driver was in a rush or had a date planned somewhere because we arrived in Siem Reap in less than 4 hours. Tuk Tuk drivers were already hustling offering rides at 3 am just like that.
Angkor was quite like Disneyland Paris: tourists were everywhere taking photos with their selfie-stick, parents were running after their kids meanwhile monks were trying to escape from this madness. 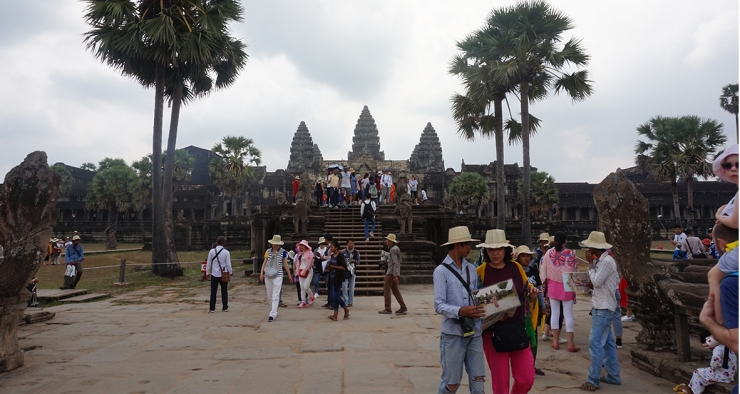 « Playa, playa, ohh playa » was playing in a loop while we were cruising across the jungle. Rodrigo (I can’t remember his name, so I just used one of my favorite soap opera) was feeling himself, taking selfies and surfing on dating apps while driving. He dropped us off on a muddy road, pointing at several directions and drove off.

We arrived in Sihanoukville, an emerging city located on the South Side of the country newly colonized by China. In fact, people called it little Macao. Skyscrapers were rising out of nowhere, and casinos with Mandarin signs were at every corner like Burger Kings is in the USA.

Along the cost, the effervescence spared the small town of Otres Beach. Hippies, tax evaders, you named it had elected domicile on this peaceful town. We did too.
Mom and I had quite an intense schedule between sipping cocktails, sunbathing and running away from afternoons showers.

The sense of adventure had taken over of my body when I looked at a brochure for Koh Rong island. I booked a ticket from a random salesperson that barely spoke English and the next day when I showed up at the ferry station the agent looked at me up and down as if I was a criminal. The ticket happened to be fake.
I was on a thug mode. I saw a local on his motorbike and asked him to drive me around. He told me 10$, and I told him 1$, he said ok. Everyone was looking at us since we were an imperceptible (improbable) duo. He was smiling and waving at everyone as if he was the plug. Ahead, I saw my pray and yelled: « where is my money at.» 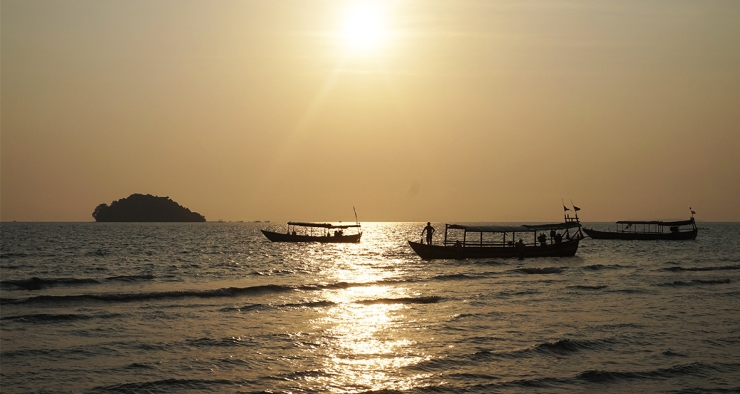 Cambodia is beyond your expectations. Whether you’re an idealist, melancholic, hyperactive or a thug, you will find a little something that will sparkle your heart.
My tempestuous (calm down I looked in the dictionary for this one) journey took me across a beautiful and diverse country that is attempting to move on besides its scars from the past.

A-must after being dragged all day by your mum to all the temples in the city.
Kmer massages for 8 dollars

Your grandma must have asked you to bring her a few magnets or crystal balls (or you might even want one for yourself). Located by the river, this open-air night market will have you add some weight to your luggage.

« Allons enfant de la patrie, le jour de gloire est arrivé »
This French-owned Bistrot will have you sing all night long (in your head). An excellent overview of the contemporary French cuisine. Mad crush for the Tuna Tataki (11$)

4.50$ cocktails? Say no more
Located on Otres beach, this boutique hotel/bar is the shelter of everyone running away from the IRS. You might be one of them.

I can’t tell you the address since there are no streets on this side of the city. Just follow the moon.

Perfect gateway from Sihanoukville madness. Rooms are located around the pool allowing you to take a glimpse on your neighbor’s secret activities. Complimentary breakfast with a chef making your dreams come true…almost